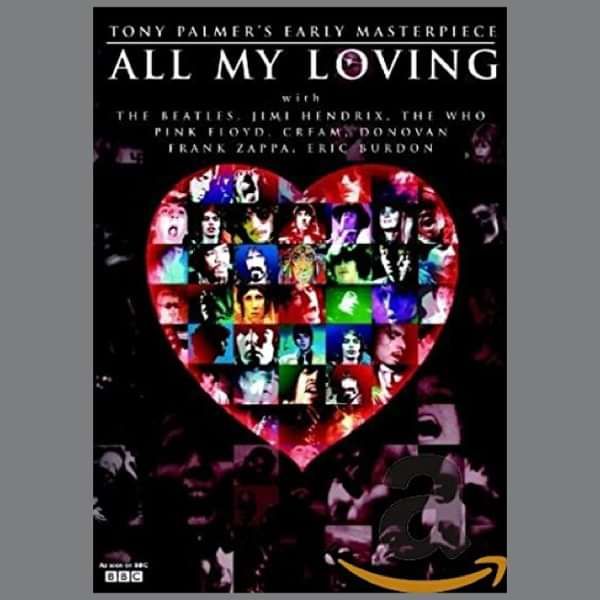 Various Artists, including The Beatles, Pink Floyd, Cream, Jimi Hendrix and others: All My Loving DVD (TPDVD101)

'Groundbreaking 60's TV documentary finally makes it to DVD Acclaimed at the time of its original broadcast on the BBC in 1968 as 'a psychedelic experience which 10 years from now will be the definitive document of its time', it's only now that acclaimed documentary filmmaker Tony Palmer's landmark film on the social and cultural significance of the then-emerging pop culture is getting its first commercial release. Very much a product of its time, All My Loving uses the then-contemporary arts documentary style with its rapid cutting juxtaposing interviews with Paul McCartney, Frank Zappa, Pete Townshend, Donovan, Eric Burdon and Jimi Hendrix with live, on the road and behind the scenes footage of the Beatles, Cream, Pink Floyd, the Who, Hendrix and, by way of a historic counterpoint, newsreel images of the Vietnam war. Additionally, a supporting cast of miscellaneous music biz movers, shakers and personalities including Lulu, George Martin, Derek Taylor, Manfred Mann, Kit Lambert, Anthony Burgess, George Harrison's mum, and the Maharishi are all glimpsed, however, the film's most incisive comments come from Messrs Zappa and Burdon. On top of the original 55-minute film the DVD's bonus features include an interview with Tony Palmer and a gallery of vintage Ralph Steadman cartoons. All said, All My Loving survives as a fascinating historical artifact especially when viewed with the hindsight of the subsequent complete corporatisation of what was once considered the counter culture.' Grahame Bent (Record Collector)

Telegram from Paul McCartney: 'This is just great; absolutely what we meant'

Daily Telegraph: 'If Mr. Palmer's intention was to disturb, he succeeded brilliantly. It was absolutely chilling.'

Observer: 'It said more about pop than a year of Top Of The Pops.'

Daily Express: 'With hideous, clamorous force, Tony Palmer's film about the pop world burst out of the TV screen last night - a disturbing piece of television which no parent could afford to miss. It was certainly not a film which will die,a psychedelic experience which 10 years from now will be the definitive document of its time. How often does TV really make you sit on the edge of your chair?'

Disc & Music Echo 'Magnificent - honest, accurate, unbiased and totally frank. As a comment on today, it was horrific and powerful, and as a protest it was stunning. Director Tony Palmer offered no personal comment. Questions were raised and thoughts recorded, but no editorial explanation or reason was forced on us. The conclusions were our own. It was absolutely superb'

Spectator 'Remarkable...I have no doubt that wherever it is shown the film will win professional acclaim.'