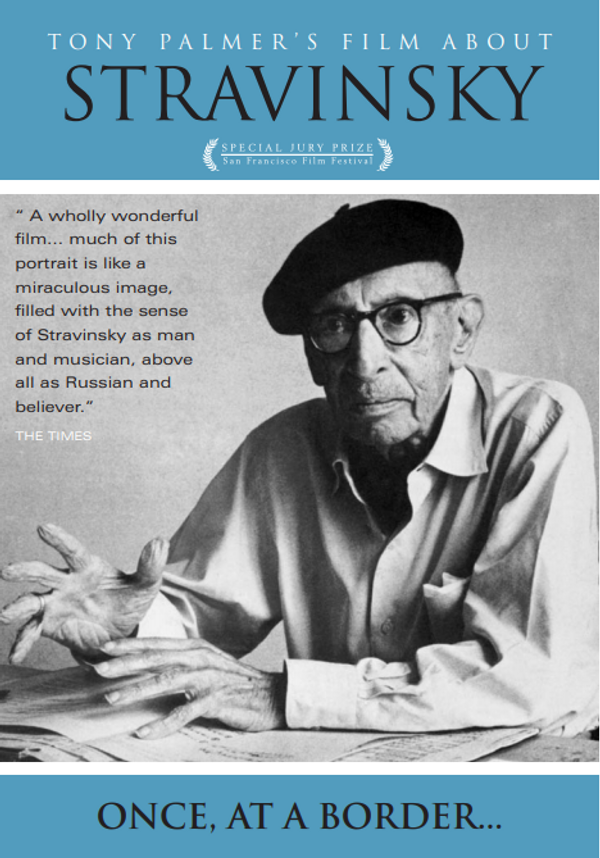 Stravinsky: Once At A Border DVD

Once At A Border DVD

“All the virtues of the film seem to stem from Stravinsky himself, and no higher tribute could be paid to the technical virtuosity of Palmer’s film which achieved miracles of compression, lucidity and respect” THE FINANCIAL TIMES

“A wholly wonderful film...much of this portrait is like a miraculous image, filled with the sense of Stravinsky as man and musician, above all as Russian and believer.” THE TIMES

Made at the request of the Stravinsky Estate to commemorate the 100th anniversary of Stravinsky’s birth, this highly-praised, and award-winning film celebrates one of the most important and influential composers of the 20th century. It includes documents, photographs, and films never seen publicly before. Stravinsky’s three surviving children talk about their father, and there are contributions from Madam Vera Stravinsky, his musical associates Robert Craft, Marie Rambert, Balanchine, Benny Goodman, Serge Lifar, Jean Cocteau, Diaghilev’s secretary, Nijinsky’s daughter, Rimsky Korsakov’s granddaughter, Nadia Boulanger, Georges Auric and many friends and colleagues.

Also included in the film are important performances: Les Noces in its original scoring, Petrushka, specially recreated for the film by the Bolshoi Ballet in its 1911 choreography, The Rite of Spring, the Symphonies, the Violin Concerto, The Rake’s Progress, The Symphony of Psalms…and much else.

Finally, there is a priceless film of Stravinsky himself, talking, remembering, conducting, at work and at home and in the room in which he actually composed The Rite of Spring, in this altogether unique portrait.

Directed and Edited by Tony Palmer

5.0 out of 5 stars The Documentary to End All Documentaries Reviewed 20 March 2021

This 150 minute documentary on Stravinsky's life is, by far, the best one I have ever seen done on any composer. Produced in 1980-81, in time for Stravinsky's centennial in 1982, and now re-released in time for the 50th anniversary of Stravinsky’s death, prolific English filmmaker Tony Palmer really, really outdid himself. There is nary a dull moment in the entire thing; apparently Palmer was asked to do this film by Mme. Vera Stravinsky and much material that appears was made available by herself and also Robert Craft.

It seems very fortuitous, in retrospect, that Palmer and his staff were able to interview many soon-to-pass figures from the artistic world of the yesteryear - Serge Lifar, Boris Kochno (Diaghilev's secretary), 3 of Stravinsky's four children, his second wife, George Balanchine, concert promoter Jean Wiener, Kyra Nijinsky (daughter of famed Vaslav Nijinsky, choreographer of "Le Sacre"), Marie Rambert (who danced in the premiere of "Le Sacre"), Georges Auric, and many others. Stravinsky had a difficult, but extremely full and rewarding life. Naturally, not everything could be covered in depth in a short span of 2-3 hours, but Palmer hits all the high points, and wonderfully well. The best parts of the film are Stravinsky's narrations - I'm not sure when these were done, but they are integrated well into the film. Also great are close-ups of many old archive photos and documents (including parts of Stravinsky's scores) - a lesser director than Palmer would have glossed over many of these fine things. For what it's worth, my favorite parts are (1) the beginning of the development of the film, which segues from the present-day Russian fair, showing where Stravinsky drew his first ideas for composition, into an orchestral performance of "Petroushka"; and (2) the end of the first half - where Palmer covers the deaths of Stravinsky's eldest daughter, and wife - sad of course, but the background music is the 'Aria II' and 'Capriccio' from the Violin Concerto (1931) as the accompaniment to the narrative. Kyung-Wha Chung, arguably its best interpreter, submits a heartwrenching oration of the Concerto, and there are a few very nice shots of Chung playing.

The latter portion of the film is even more informative - while the first half largely focuses on his early years, "Le Sacre", "Petroushka", Diaghilev, and "The Firebird", and also "Les Noces" (one of Stravinsky's hallmarks but rarely performed), which receive superlative performances. The second half looks at Stravinsky's life and work after moving to Hollywood around 1940. The highlight of the second half is coverage of his recordings for CBS Masterworks and a couple of his commissions ("The Circus Polka", and the arrangement of "The Star Spangled Banner", for which he was arrested and jailed) are covered. The sequence on Stravinsky in Hollywood was done quite well - and oddly, nearly 30 years later, much of the footage Palmer shot looks the same, particularly the street signs! If I had to criticize this picture in any way - and it would be difficult to do so - I would have to say that certain segments go on just a bit too long. There are some fine performances by about a dozen different ensembles throughout the course of the film, but some of them (like "Les Noces") go on for many minutes at a time (sometimes with various photographs and location shots simultaneously.) The final part, covering Stravinsky's death, showing the very aged Madame Vera Stravinsky, is another example. Stravinsky's principal collaborator, Robert Craft, certainly had a lot to add, but some of the segments with him are just creepy (particularly the one where he's in the room where Stravinsky expired.) Apparently Craft was responsible for swaying Stravinsky into some rather objectionable musical territory in his later years, but of course, this isn't covered. But these small issues aren't at all detrimental.

The conclusion of the film is absolutely miraculous - watching the aged Stravinsky - physically frail but still mentally perfect - conduct the Berceuse and Finale from "The Firebird" (with the audio narration once again superimposed) - is spellbinding. As soon as the final B-major chord comes, the applause is instant - and Palmer closes the film with a side shot of the man momentarily frozen in space and time. I am not an overly emotional person, but every time I see this, something just hits me. To say that I recommend this film highly is a massive understatement. Bravo, Tony Palmer - I think you just about killed the possibility of anyone else ever making a better documentary.