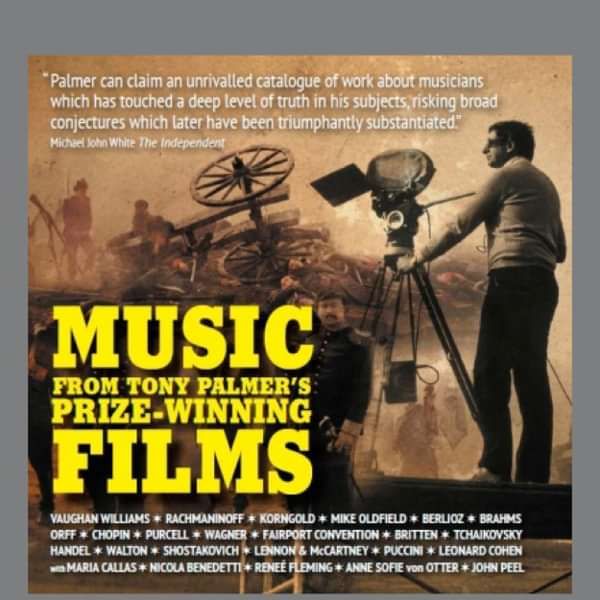 Tony Palmer's vast filmography of over one hundred films ranges from early works with The Beatles, Cream, Rory Gallagher, Jimi Hendrix and Frank Zappa (200 Motels), to the famous portraits with and about and about Walton, Britten, Stravinsky, Maria Callas, Andre Previn, John Osborne, Leonard Cohen (Bird on a Wire), Margot Fonteyn and Menuhin, as well as feature films such as Testimony, starring Ben Kingsley as Shostakovich. His 7 hour 45 minutes of film on Wagner, starring Richard Burton, Laurence Olivier and Vanessa Redgrave, was described by the Los Angeles Times as "one of the most beautiful films ever made". Among over 45 intertnational prizes for his work are 13 Gold Medals at the New York Film & Television Festival, awards from the Jerusalem, San Francisco, Sao Paulo, Sofia, Cuenca and London Film Festivals, as well as numerous BAFTA, EMMY, GRIERSON nominations and awards. In 1989 the National Film Theatre in London staged a major retrospective of his work, the first maker of 'arts' films to be so feted. He is also a prize-winning opera director, recipient of three Platinum and two Gold records, and was awarded a SONY prize as a radio presenter. A D.Mus (Hon), D.Litt (Hon) and FRGS, he is the only person to have won the PRIX ITALIA three times, and in 2014 was nominated for the Glenn Gould International Prize, unprecedented for a documentary film maker.