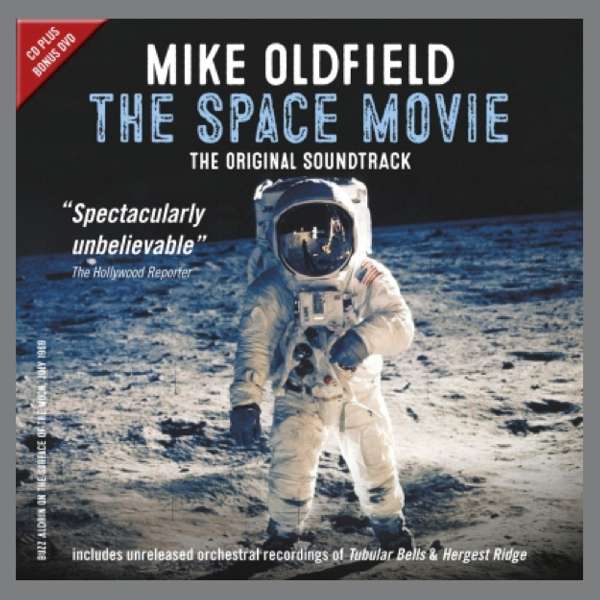 This classic film was originally commissioned by London Weekend Television and Virgin in 1979 to mark the 10th Anniversary of the first landing on the moon, July 21st, 1969. A recent discovery of a print in mint condition has enabled us to issue the film in a sparkling new (and complete!) edition.

The invitation to make the film came out of the clear blue sky from NASA in January 1978. I was invited to Washington and shown the mountain of film NASA had collected from the very beginnings with John Glenn, the first astronaut to orbit the earth in February 1962, until Apollo 17 December 1972. Use whatever I wanted, I was told, plus all the talk-back between ground control in Houston and the various space missions. NASA’s extraordinary and spectacular images made me realise I had access to a treasure house beyond imagination.

From the beginning, I wanted Mike Oldfield to write the music, and the soundtrack which emerged – a combination of hitherto unreleased recordings including the orchestral versions of Oldfield’s early masterpieces, Tubular Bells and Hergest Ridge - is remarkable, perfect in every way; evocative, powerful, an inspiring match for the images. And I’m sure it is that, plus of course, the astonishing NASA footage and the sound of the astronauts chatting away in space. Virgin Films may have long gone, but together these elements made and make the film what it is - something rather special.

At a Gala Screening in the Egyptian Cinema in Hollywood in 2008, the film was introduced byBuzz Aldrin, the second man to walk upon the moon. He said: “It gives me enormous pleasure, and a thrill, to be able to introduce Tony Palmer’s remarkable film about our space adventures. I say remarkable because at the time it was made, 1978/9, very little of the footage you are about to see had ever been seen in public, images which are now so familiar as to be truly iconic. But it was Tony who used them first, and we are very pleased that he did, even if he did construct the longest take-off in history! I still get a chill hearing some of the talk-back which, like the footage, NASA had provided for Tony to use. When the rocket takes off, boy is that a roller-coaster ride, bumpy as hell. So when you hear my voice saying “little bit of shaking there”, you’ll know what I mean! So thank you, Tony, for what you did.”

The distinguished film critic Alexander Walker said after the first screenings: “The best British film screened at Cannes (in 1980) was Mike Oldfield and Tony Palmer’s The Space Movie, with unique footage from NASA and music by Mike Oldfield. Palmer’s film combines both in a wonderful, at times profoundly moving tribute to the astronauts from Cape Kennedy. The film includes one of the finest space launches ever collated, with footage that is unbelievably spectacular. Full marks to director Tony Palmer. The result is breathtaking, beautiful and brilliant.”

This version comes complete with the Director's Cut BONUS DVD of the movie.

Mike Oldfield is perhaps one of the most well-known soundtrack artists of all time. However, this honour is often attributed to the use of his composition ‘Tubular Bells’ in The Exorcist and subsequent works. In The Space Movie, Mike Oldfield provided one of his first-ever film scores and the great mystery remains, why are there not more?

With inspiring excerpts from the film embedded in the work, Oldfield’s soundtrack is wrapped in a symbiotic beauty and chaos. The film samples and the music collide and coalesce, juxtaposed, embraced and exploring everywhere between.

From the jaunty Popeye jingles to the orchestra swells through prog-rock jams and deep brass ballads. In The Space Movie, Oldfield explores the journey to space touching on styles from across the world and with the crew journeys beyond.

Perhaps the greatest testament to the album is that it tells the story of the film so well, that a listener can experience the entire voyage without even viewing The Space Movie. The moment of take-off in this respect is one of if not the best moment in the soundtrack; Oldfield embraces the samples of the countdown and the rocket taking off and allows the music to subside whilst the rapturous spectacle takes place. As the rocket erupts almost to the point of clipping, the listener is submerged in one of the most unique and awe-inspiring sounds that can be experienced in the real world; some would choose to convey this with music or accompany it, Oldfield shows his talent by allowing the samples to take precedence when necessary but, at the same time is never afraid to show the full wealth of styles in which he thrives.

In many ways, The Space Movie was a vehicle for Oldfield and a quest for the artist himself. The Space Movie provided Oldfield a platform to present his capabilities to an audience that likely had only ever heard Tubular Bells and, though it would never make him the next Bernard Herrmann, it would showcase his talent to a massive audience. The soundtrack also acted as a chance to preview music from Incantations to new listeners but it could be argued that the songs from incantations actually sit better amongst the soundtrack and its collage of excellent samples.

Listening to the soundtrack and watching the film, I have to say, it’s quite baffling that Oldfield hasn’t really composed many soundtracks. Aside from The Killing Fields and Oldfield’s score for a relatively obscure French film jeune fille assassinée, there basically aren’t any other instances of Oldfield acting as a composer for a film. It would certainly be interesting to see more scores from Mike Oldfield in the future as such a celebrated artist with a clear talent for the medium, maybe one day we will."