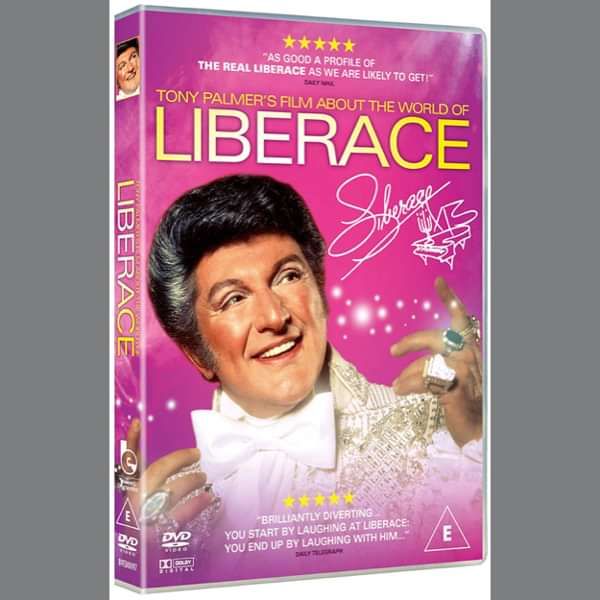 Liberace himself called the book The Things I Love and this DVD is nothing more nor less than precisely that, as told to film maker Tony Palmer.

Liberace himself takes us on a guided tour of his Hollywood and Palm Springs homes and his treasured possessions. A celebrated connoisseur of antiques, Liberace tells us about the origins and restoration of his extraordinary collection of crystal chandeliers, rugs, furniture, automobiles, pianos and of course the gold candelabras.

Lavishly illustrated with photos from his private library, Liberace talks about the costumes, jewellery and sense of theatre that earned him in his lifetime the title of ‘Mr Showmanship.’ Within a very few years, Wladziu Valentino Liberace sprang from West Allis, Wisconsin, to become America’s first television matinée idol and one of the most successful nightclub performers of all time. He popularised classical music for the general public, and earned the kind of devotion and admiration that became the envy of many, more ‘straight’, performers. But to do this he worked phenomenally hard, was a devoted family man and above all an accomplished pianist.

Palmer’s DVD is more than a catalogue of Liberace’s possessions, however. Nor is it a mere chronicle of his achievements. It is a testament to a remarkable life, with deeply felt observations about his self-image, marriage, children, the press and religion. “The difference between men and boys is the price of their toys,” he quips. And although Liberace took evident delight in collecting beautiful things, it is clear that it was people and the love they provided that really mattered to him. He was unique, and remains so, and this book is a celebration of that fact.