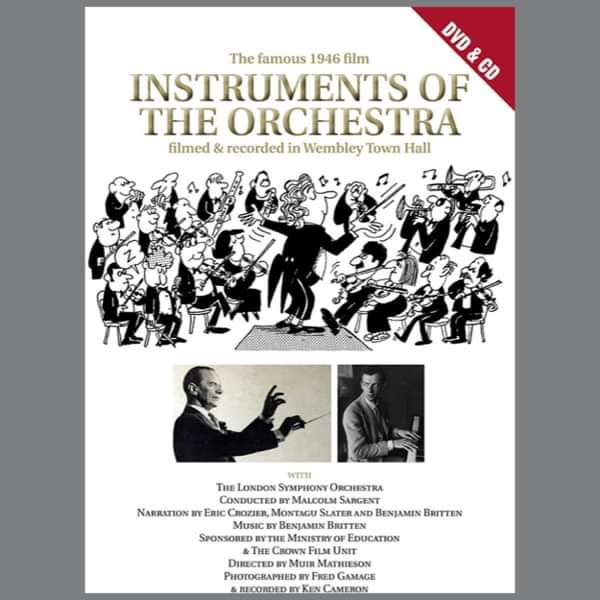 Late in 1945, Basil Wright and the Crown Film Unit commissioned from Benjamin Britten the soundtrack for a film they were planning to be called ‘Instruments of the Orchestra’, which was to be part of a new postSecond World War educational drive, initiated by Muir Mathieson and featuring the London Symphony Orchestra conducted by Malcolm Sargent. Britten subsequently published the music under its more famous title A Young Person’s Guide to the Orchestra. Given that the purpose of the film was to introduce a general audience, and in particular children, to the various instrumental groups of the orchestra, it was thought necessary to have what is in effect a spoken ‘narration’ to be written jointly by Eric Crozier, who had produced Britten’s sensational operatic debut Peter Grimes the previous June, and Montagu Slater who had written the opera’s libretto. Britten himself, inevitably, got involved. Britten wrote the music (a set of variations on a theme by Purcell from his opera Abdelazar) at characteristic high speed over Christmas 1945, completing the composition on New Year’s Eve, and the filming took place in Wembley Town Hall the following spring and was eventually released on November 29th 1946. The score is “affectionately inscribed (by Britten) to the children of John and Jean Maud: Humphrey, Pamela, Caroline and Virginia, for their edification and entertainment” – which tells you all you need to know about the undertaking. The black & white film is only 20 minutes long, and the ‘narration’ on this occasion is spoken by Malcolm Sargent at his most patronising. But nothing can detract from the absolute genius of the music. Also included is a CD of the first ever recording in October 1946 with Sargent and the Liverpool Philharmonic; the London Symphony was apparently ‘unavailable’. But Britten’s own 1963 recording (without any narration), once again with the London Symphony Orchestra - the Fugue of which I used in my 1967 film Britten and His Festival - remains the definitive account of this prodigious work.