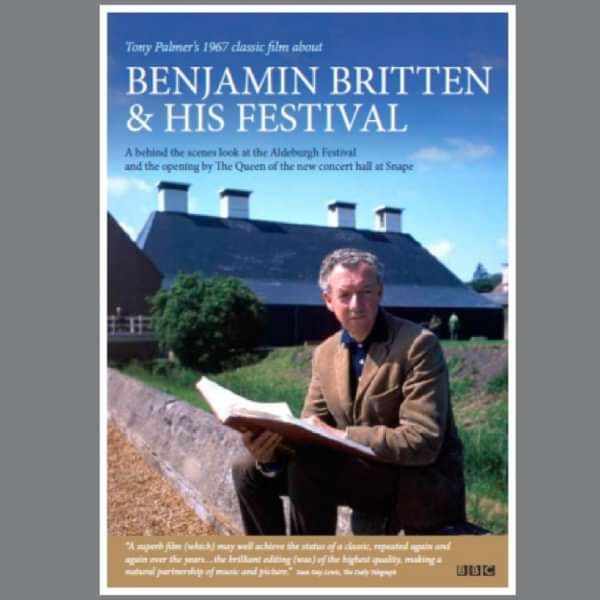 A behind-the-scenes look at the Aldeburgh Festival and the opening by The Queen of the new concert hall at Snape.

"A superb film (which) may well achieve the status of a classic, repeated again and again over the years… the brilliant editing (was) of the highest quality,making a natural partnership of music and picture."

This was my first film, which I inherited quite by chance. Britten was extremely reluctant to be filmed. A previous 10-minute profile made by John Schlesinger for Huw Wheldon’s Monitor had displeased him, although no-one had ever been able to figure out why.

But with the forthcoming opening of the new concert hall at Snape in 1967, renewed efforts were made to persuade him. Thanks to the influence of his trusted record producer John Culshaw and his friend Humphrey Burton, later both to become among my closest professional colleagues and both an enormous influence on me and my work, Britten agreed. I was hired as Humphrey Burton’s tea boy.

Then everything went pear-shaped. The weekend before we were due to start filming, Humphrey got fired by the BBC because it had been leaked to the London Evening Standard that he and others from the BBC, including Frank Muir, were about to set up the first ITV station in London, London Weekend. This was seen principally by Huw Wheldon as a terrible act of betrayal (Humphrey was being groomed to take over BBC Television when Wheldon retired), and Burton was shown the door.

I was forgotten in the turmoil or rather, what the BBC saw as an important film in its arts coverage about Britten, our greatest living composer, was forgotten. But not for long. I was nervously awaiting instructions in my hotel in Aldeburgh when two things happened. First, Huw Wheldon rang me to say not to panic: “The cavalry are coming!” he said with that unforgettable Welsh bravado and enthusiasm he imbued everyone with. And second, Britten himself rang me and said he had heard the news, and would I like to come to tea and talk about it?

I had already met him but to be summoned in this way was not conducive to a quiet life. But, as I had little choice, off I went to tea in The Red House, his home. Britten made the tea; Peter Pears cut the cake. I recall being so nervous that I don’t think I uttered a word, while the two of them fussed about and kept telling me not to worry. They would get me through it. What I most remember, however, is the two of them giggling throughout the tea like silly schoolchildren.

Years later, when Pears asked me to make a more rounded film about Britten, to be called A Time There Was, I asked him if he recalled the tea and why he and Britten seemed to me to be having a giggling fit. Oh yes, he said, he remembered very well. “You see,” he went on. “We never really wanted to make that film. Then Humphrey got fired, and we were left with you.

''And we guessed that you hadn’t the faintest notion how to set about making the film, so the result would be that we could do precisely what we wanted – if anything !! How wrong we were,” he added with a smile. “Ben loved the film, as did I, and we were very proud to welcome you into our ‘family’, as it were.”

But Britten’s instinct had in fact been spot on. I really had very little idea what I was doing. For instance I wanted to film one of the movements from A Ceremony of Carols. The end section consisted of alternate chords from the harp and the boys’ choir. I discovered in the editing that I had not filmed a sufficient number of chords, either from the choir or the harp. Easy, I thought: I’ll just cut out a couple of bars. After all, the music does tend to repeat itself at that moment.

I then forgot about it until the first screening, which was held in the old BBC studios in Lime Grove, hosted by Huw Wheldon. I sat between Britten and Pears.

The film was already running when I suddenly remembered my ‘cut’. What was I to do? Try and distract Britten at the crucial moment? Cough loudly? I was in such a panic that the ‘cut’ had been and gone before I could do anything.

At the lunch afterwards, Britten was very gracious about the film, and I breathed a heavy sigh of relief. He hadn’t noticed, I thought.

Came the moment that Britten climbed into the limousine at the door of the BBC; Pears hugged me and told me to come back to Aldeburgh soon. Britten embraced me warmly, and began to climb into the car. Just at the very last moment, he turned back to me and said with a big smile: “You know, I’m not sure if it isn’t better without those extra bars.

That, ladies and gentlemen,was the greatness of the man - whom I was privileged to know. One footnote: I chose to conclude my film using the great fugue at the end of the Young Person’s Guide to the Orchestra. This was partly because of an hilarious story that John Culshaw had told me while filming.

The previous year Britten had recorded the piece with the London Symphony Orchestra. The recording had gone well (after all, Britten was also an accomplished conductor) until it came to the final fugue. For whatever reason, it had proved difficult to hold together and Britten was getting increasingly tetchy. Culshaw decided it was time for a break, and that they should all have another go ‘after tea’

When the orchestra reassembled, Britten gave the cue for the closing moments of the percussion variation leading into the finale, and then set off conducting the fugue at a noticeably quicker pace than they had previously rehearsed. Culshaw feared the worst. Osian Ellis, the harp player, told me years later that he had panicked – his part in the fugue was not easy, even at a slower pace. Somehow, they all survived together right through to the end. As the last chord faded away, Britten just shrugged and gave out the broadest of grins.

It remains to this day the most brilliant of all recordings of that phenomenal piece – and boy, what a speed is that fugue. So that, ladies and gentlemen, is Britten’s greatness as a musician